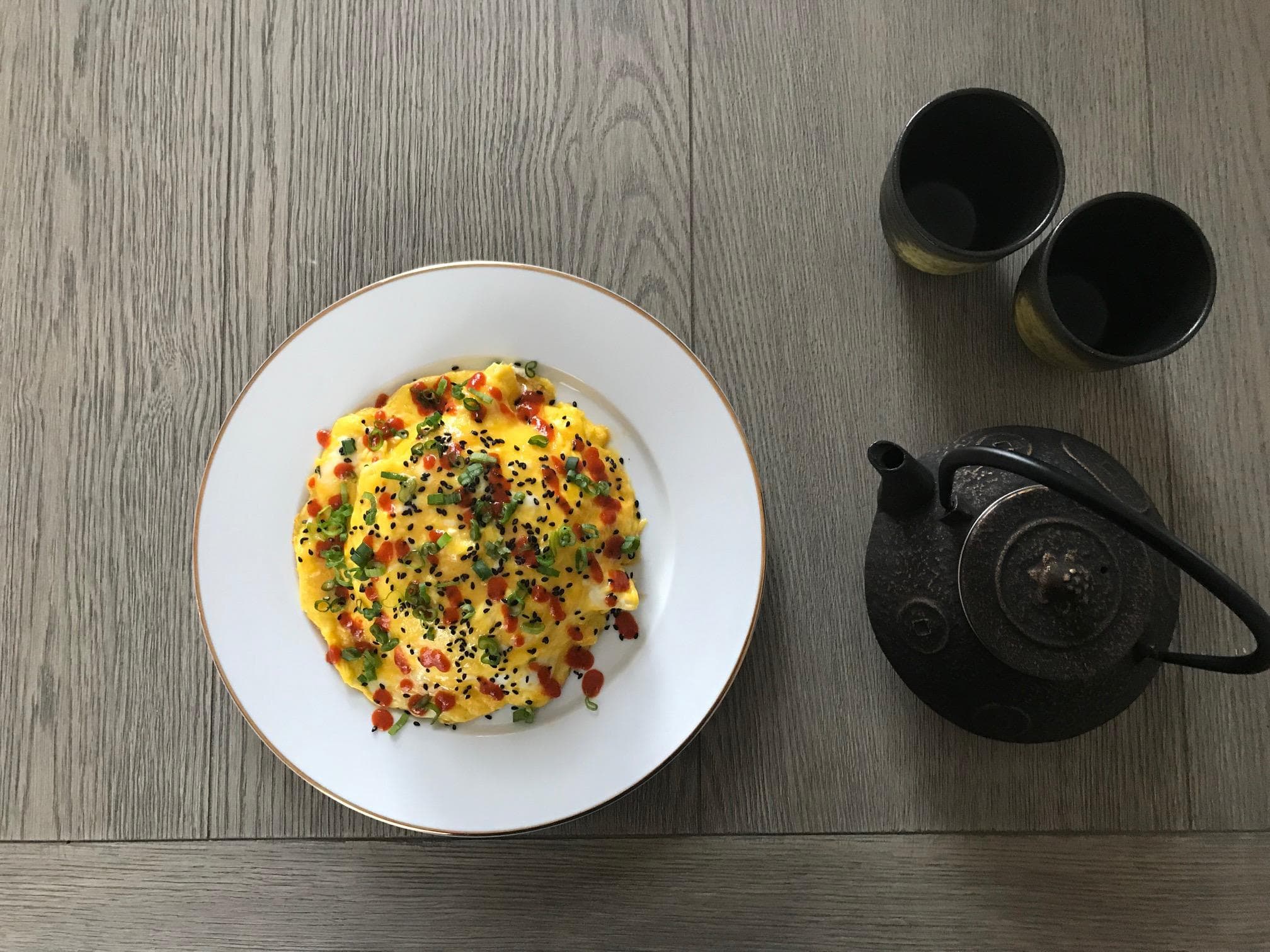 There’s a saying they have in Japan: hara hachi bu, or “eat until you’re eighty percent full.” It’s an old piece of Confucian wisdom that has defined the Japanese approach to food for centuries. If there was a similar maxim that could describe the average food philosophy in the U.S. it would probably be something like, “Stuff your stomach until you’re nauseous.”

One of our goals at Hudson Table is to make you curious enough to try something new, specifically when it’s related to food and cooking. And what better way to spark your curiosity than with Japan – that magical island in the East that ignites the imagination of aspiring samurais, chefs and food-worshippers alike. Sadly, our manual for the proper conduct of a samurai warrior will be posted at a later date, but we do have a tiny piece of Japan to share with you, along with an umami-packed Japanese breakfast recipe for tomorrow morning.

We’ll start with the facts. In Japan, they eat a lot of rice – they’re also one of the healthiest people on Earth. “But white rice is the enemy!”, you shout as you scramble to cross-check the paleo, ketogenic and Atkins’ rule books scattered across your desk. Well, whatever the Japanese are doing (and eating), they must be doing something right. In 2017 the World Health Organization reported Japan as the number one country in the world for average life expectancy – which now makes them number one on that list for more than twenty years.

Obviously, the Japanese diet is only one of many factors that account for their health and longevity – still, what is so unique about the way they eat? And why do chefs from all over the world visit Japan to study the Japanese methods of thinking, the unrivaled beauty of their plating, their mastery over flavors and their long-cherished food practices?

Those questions can be answered with washoku, a philosophy that makes up the very foundation of the Japanese food culture. Washoku translates into the “harmony of food.” The philosophy is guided by a set of five principles: The first three principles are that each meal should contain five colors, the five tastes, and five different cooking methods. By adhering to those three principles meals will naturally have a healthy balance of nutrition, flavors and textures. The fourth principle is that every meal should be made to appeal to all five senses, not just taste; sight, sound, smell and touch (textures) are equally as important. A meal should be an immersive experience that fills both the belly and the soul. Lastly, perhaps the secret to everything, food is to be eaten with the five spiritual outlooks of appreciation, worthiness, compassion, self-purification and the attainment of enlightenment.1 Wow, that’s some pretty deep stuff for a meal. Think about that next time you’re eating dinner in your car on the way home from work. (If you want to learn more about Japanese cooking you should check out Elizabeth Andoh’s book Washoku: Recipes from the Japanese Home Kitchen.)

If you still haven’t booked your trip to Japan yet, we have the next best thing. Come to Hudson Table for our sushi class February 28th if you’re interested in learning more about Japanese cuisine in a hands-on setting. You’ll be a hit at the next tea ceremony you host. You can book the class here.

Now, that breakfast recipe we promised – brace yourself. A traditional Japanese breakfast consists of fish, pickles, rice, miso soup and eggs. Fish and miso soup for breakfast? That’s just weird. But probably no weirder than you grabbing that fourth piece of French toast slathered in syrup at your hotel brunch buffet. Hey, what’s normal anyway?

While you’re pondering the answer to that, know that everything in Japan is not so traditional. In the spirit of yōshoku, or Western-style food, omurice is an omelette served over a mound of fried rice, commonly topped with Japanese kewpie mayo and ketchup. Of course there’s many variations of omurice. This recipe was adapted from Serious Eats with a few adjustments: the okonomiyaki sauce and kewpie mayo are replaced with ingredients you most likely already have at home, but if you do have them or can buy them from an Asian grocery store then please use them if you’d like. We’ve also added black sesame seeds for color and extra nutrients, while Siracha and scallions top off the dish to serve. 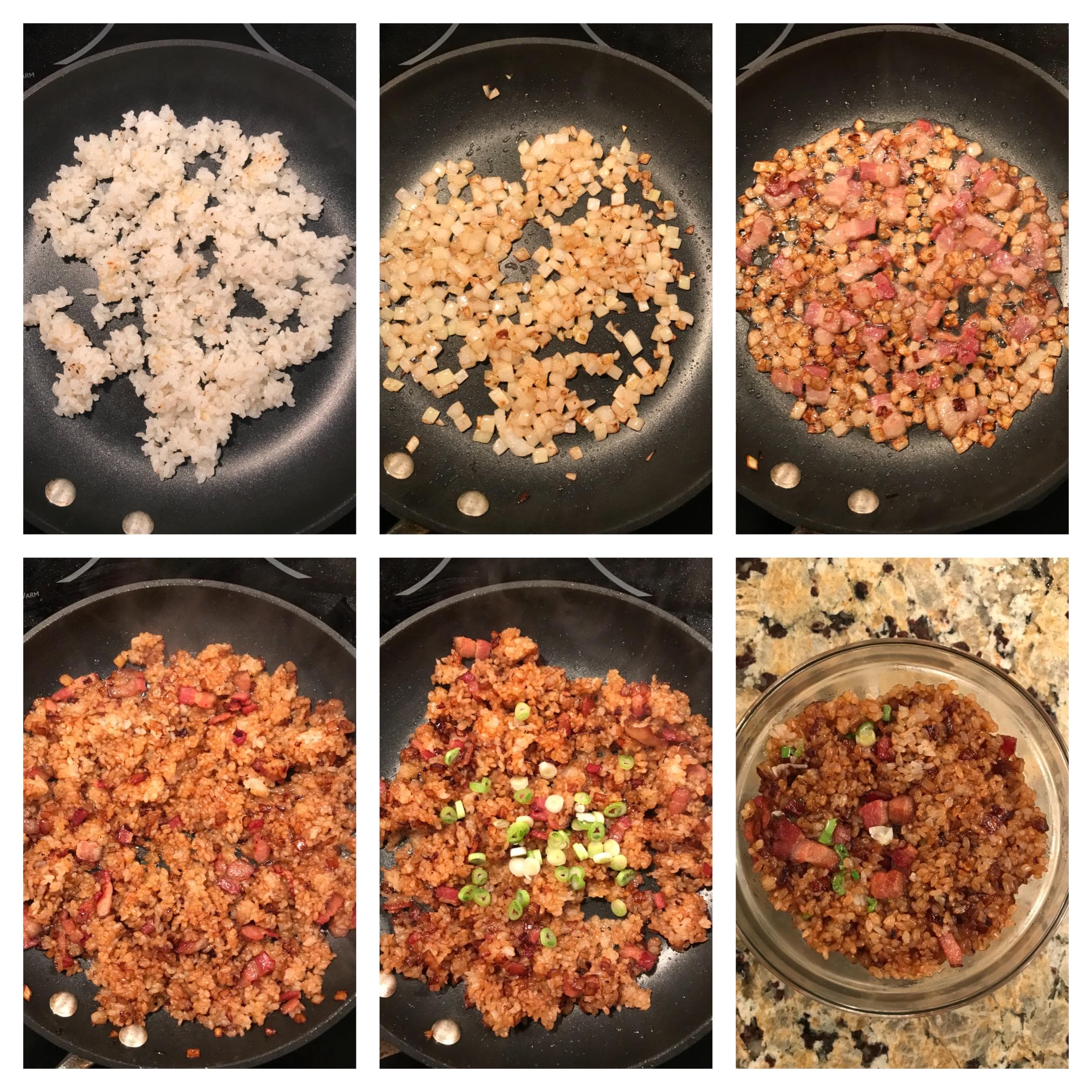 The progression of fried rice 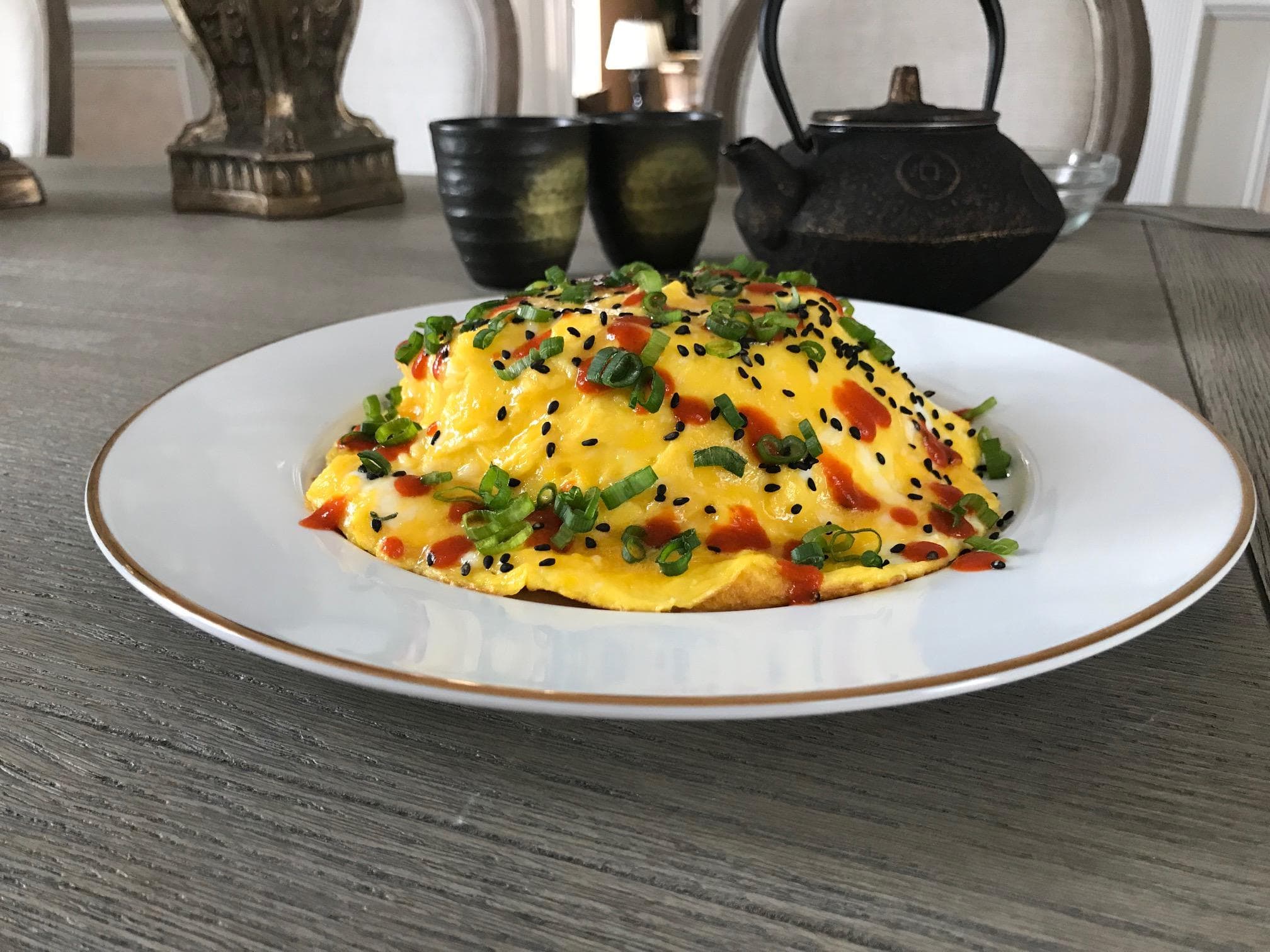 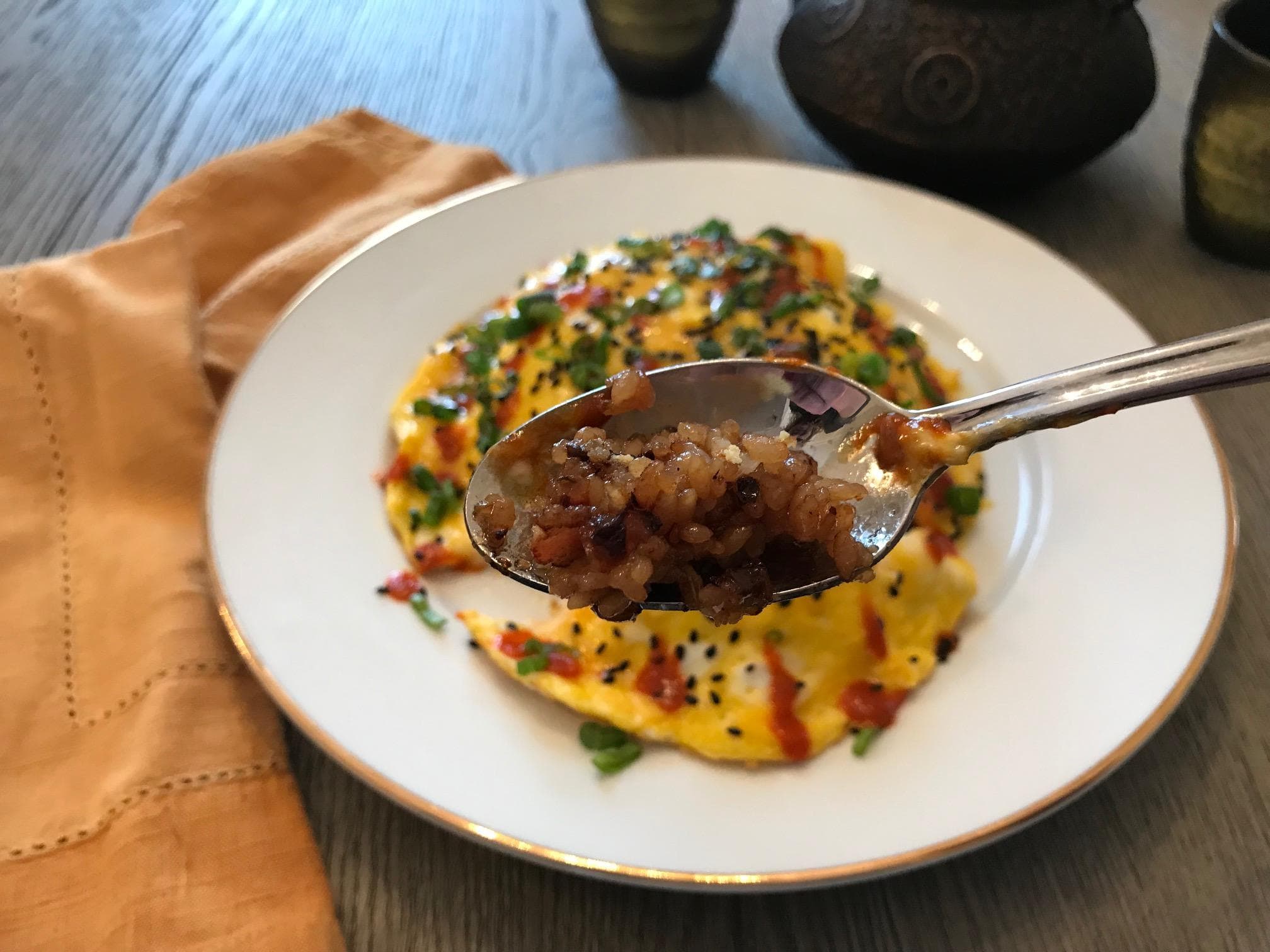 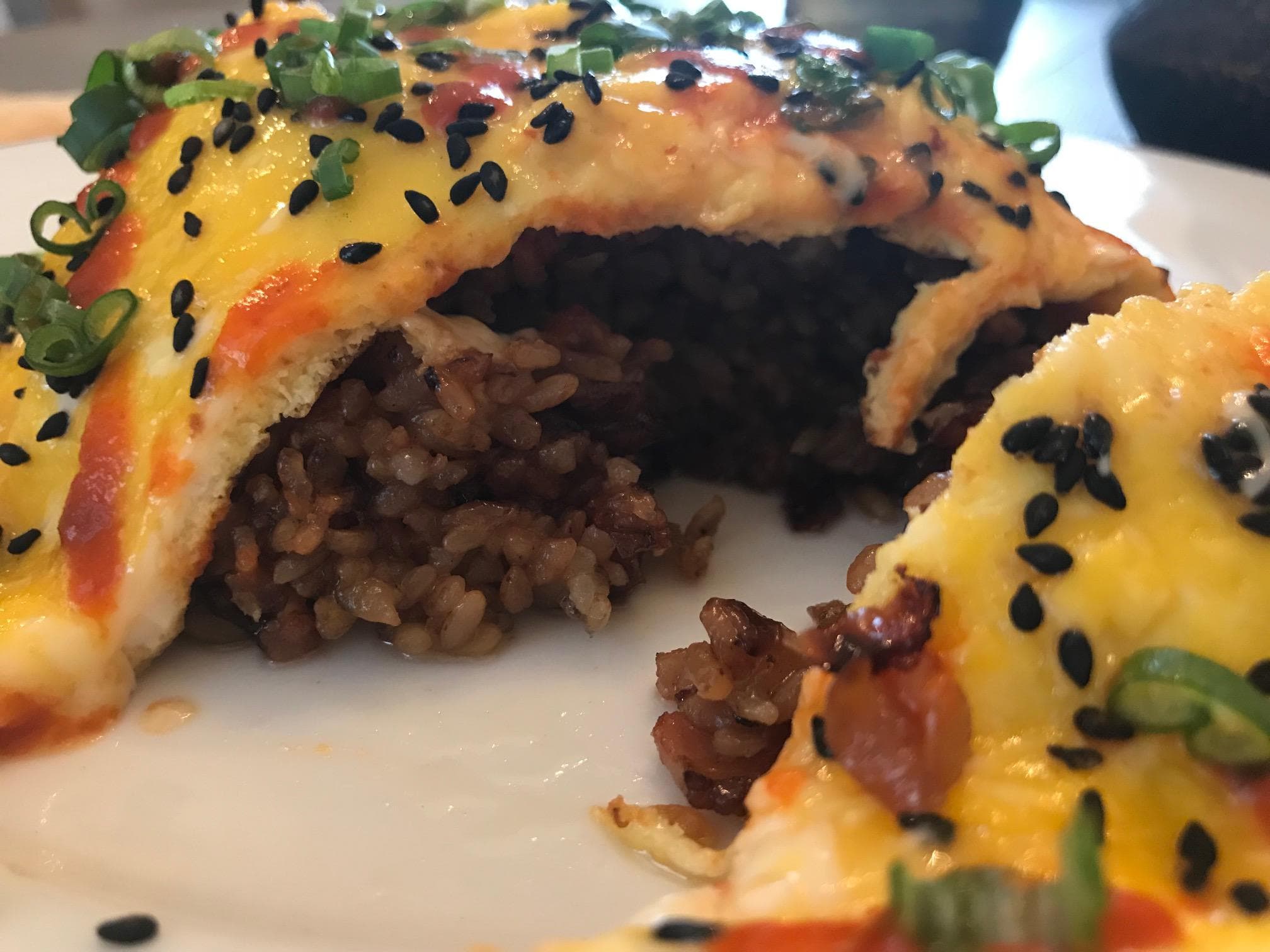